Continuing on… So, with the cookies from CookieBar safely tucked into my son’s backpack (minus two)–between the snow boots he snuck into the pack without my prior knowledge–we headed West in search of other culinary delights. In particular, more dessert. 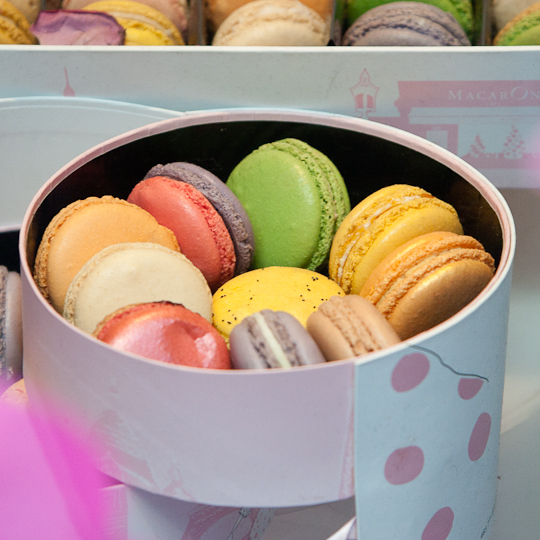 Even though the grid is fairly easy to follow in midtown with the numeric streets and avenues, entrances to buildings aren’t always where you’d expect. Case in point: MacarOn Cafe. I knew it was supposed to be on Madison Avenue between 58th and 59th Streets, but despite walking the block three times, we could not find it. I gave up for a bit and allowed the kids some respite in F.A.O. Schwarz while I double-checked the game plan. When I could finally get internet (which, BTW, as much as I love Verizon, I HATE it in the City), I found where we had erred–while the location address is 625 Madison Avenue, the entrance is on 59th Street. So we headed out into the cold to try again. 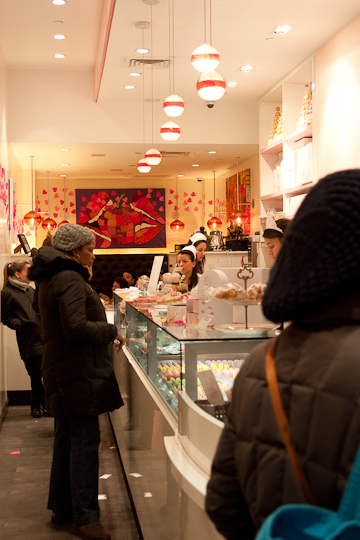 This time, we were successful! The hearts decorating the window helped draw our eyes into this tiny little gem. The quite narrow cafe had a beautiful window display and a fantastic assortment of macarons inside. I felt like a kid in the candy store as I made my selections for my gift box: crème brûlée, cassis, raspberry, dark chocolate, passion fruit, pistachio, and wedding almond. The kids were disappointed that we weren’t staying to eat, but there were only 4 or 5 tables tucked into the back and they were all occupied. 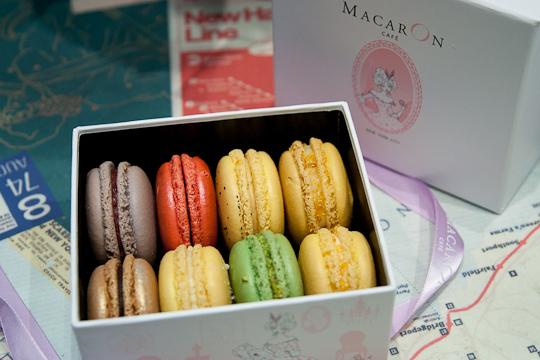 The trouble with macarons is that they’re almost too pretty to eat. Granted, when I’ve made them, I didn’t have that problem. These, however, glowed with perfection, begging to be photographed and then tucked away somewhere safe to guard for all eternity. I had a hard time convincing myself that it was okay to break into those delicate shells and indulge: that is their raison d’être, after all. I almost cried when I cut into the first one, but by the last, I was an old pro. The passion fruit did not incite any passion in me, but the rest of them were pretty darn good. It would be difficult to pick a favorite. 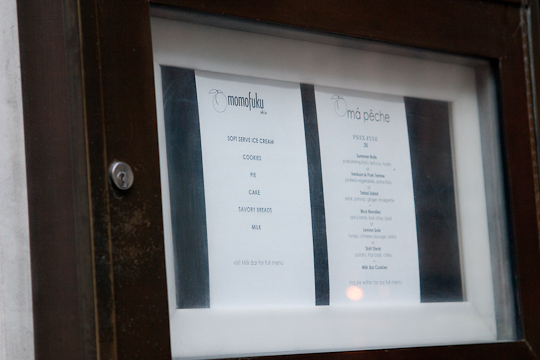 More confusion after that. We tried to find F. C. Chocolate Bar but had no clue that google maps’s information was incorrect as they had recently relocated to the Plaza. Momofuku Milk Bar (midtown) was just as elusive. Once we found it, we understood why: all that identified it was the simple white menu under glass on the wall. 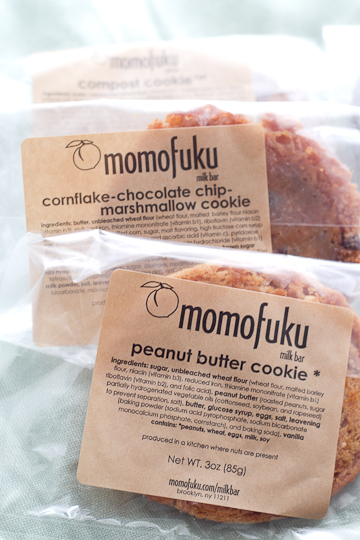 I liked that they had many of their products out in bins where you could make up your own box of cookies. They were also pre-wrapped, perfect for bringing them home–which is what I did with most goodies since it’s awfully hard to meaningfully sample and photograph with 2 kids who are 5 and under in tow. I grabbed 1 each of the peanut butter, cornflake-chocolate chip-marshmallow, compost, chocolate-chocolate, and blueberry & cream cookies, added a bag of birthday cake truffles to the box, and we were on our way again. (I gave a few of these away at home so I didn’t get to sample all of them, but I can say that the compost was very coffee-ish. I really liked the cornflake-chocolate chip-marshmallow cookie. As for the truffles, at first bite, I wasn’t impressed… but they’re like crack. Suddenly, I craved them and couldn’t get enough! What do they put in those things anyway? I can just imagine what their Crack Pie is like!)

We happened upon Fluffy’s Cafe entirely by accident. I saw it on my original google map but did not intend to go there as it seemed to be out of the way from our other planned stops. There we were, however, so we ogled the goods in the window and went on in to try something out.

The kids settled on glazed donuts, both chocolate and vanilla, while I relied upon the staff for my cupcake selection. He was very sure that chocolate-chocolate was the best they had to offer, so that’s what I had. This time, we sat down and ate right away, ready to take a break from our trekking. 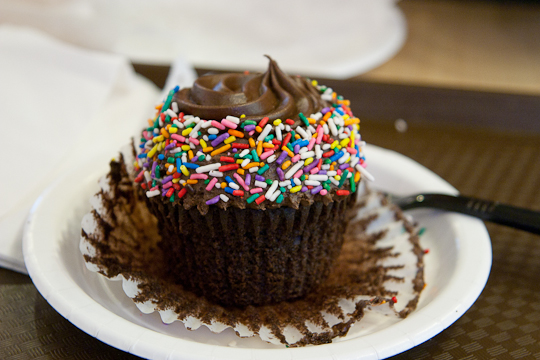 The kids had no complaints, but they weren’t very forthcoming with their observations either. I found my chocolate-chocolate cupcake to be quite moist and pretty generic. It wasn’t any more special than what I’d get at the local grocery store. It tasted just fine, it just wasn’t any different than what I could get elsewhere.

Well-rested, we continued on. Light was starting to wane so we picked up the pace. Crumbs Bake Shop was next, back on Madison Avenue.

Now, we were in cupcake territory. The case was full of them, all beautiful and wonderful sounding combinations. The calorie counts included were a little off-putting–do I really want to know there are 550 calories in one cupcake?–but I chose 2 of these monsters for the road. The girl behind the counter nestled my Vanilla Coconut and White Hot Chocolate into a plastic container for safe travels. At home, they looked pretty much as they did in the shop–and tasted really good. The White Hot Chocolate was the perfect moist/dry ratio for the cake and I loved the topping. The Vanilla Coconut was even better! Great choices! 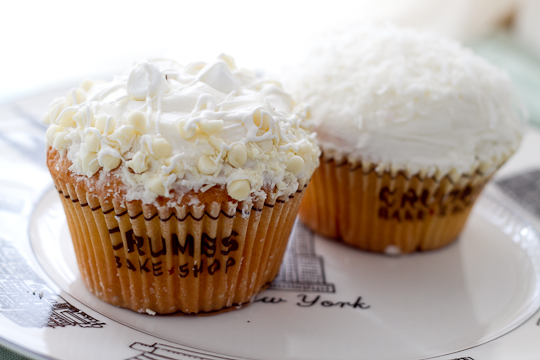 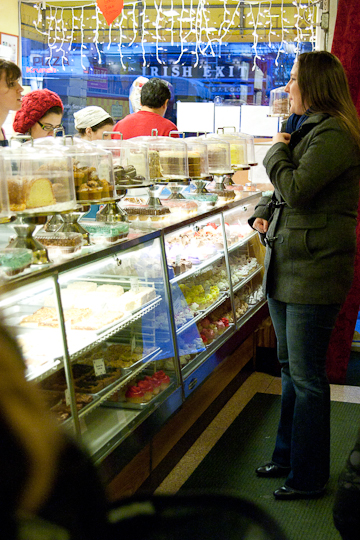 The day before our trip, BuyWithMe featured a deal for Buttercup Bake Shop. Serendipitous? I didn’t even know about the site until the day before that so it was a surprise that there would be a deal so soon that was so appropriate. And who can pass up $25 worth of baked goods for only $12?! Armed with my coupon, we entered Buttercup Bake Shop, ready to go into baked goods overload. The kids were growing weary of all the walking so luckily, this was our last stop for the day.

The girl behind the counter was very helpful in making the most of my deal. I chose 5 cupcakes–“devil dog,” red velvet, hummingbird, Lady Baltimore, and German chocolate–then 4 mini whoopie pies, a fruit bar, a peanut butter mud bar, and a cup of banana pudding. Wow. This was when I started re-thinking the whole plan of the bakery tour. How was I ever going to sample all of this? 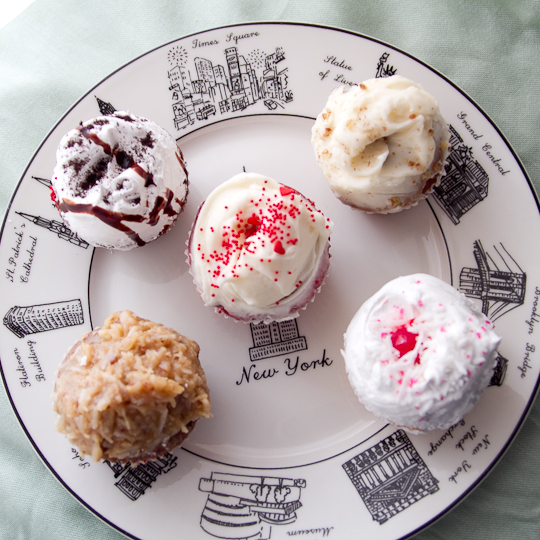 Somehow, I got through at least trying it all (what I’m going to do with the rest of it, I don’t know yet–can’t exactly give away cupcakes with a bite-sized piece cut out of them, you know?). I was a little disappointed by the “devil dog”–the chocolate sauce on top really detracted from the other flavors, in my humble opinion. There was something else about it that I can’t quite put my finger on, but I just didn’t like it. Lady Baltimore was my favorite of the cupcakes. The whoopie pies? I make whoopie pies, I love whoopie pies, these were not whoopie pies. They were some kind of chocolate cookie, not at all cake-like as they should be. They would be okay if advertised as a cookie, but if you go in expecting a whoopie pie, that’s what you should get. The fruit bar also seemed a bit bland, other than the preserves. Maybe a little more salt would help? The surprise was the banana pudding. I had never had banana pudding before and since I generally have some issues with bananas unless they’re baked into a muffin or bread, I was pretty confident this would be money down the tubes. Instead, it was quite delicious! There’s still the texture issue with the banana slices themselves, but the wafers in the pudding with them make up for it. I would have it again!

By the way, the proprietor of Buttercup, Jennifer Appel? She was one of the founders of Magnolia Bakery–and co-author of The Magnolia Bakery Cookbook that I reference often.

Which makes this interesting because we weren’t done yet… 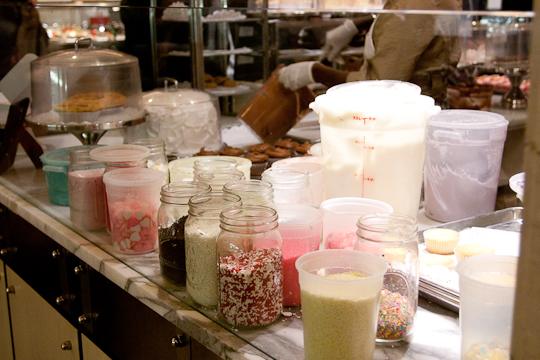 Now back at Grand Central Station, where we were waiting for the next off peak train back (over 2 hours away), we stopped by the Magnolia Bakery booth. Yeah, we did that. I only meant to watch them decorate cupcakes for a bit as I’m feeling pretty inept at it myself, but I somehow ended up in line and the next thing I knew, I ordered a white chocolate fudge brownie for my daughter and a piece of white chocolate cheesecake to bring home to hubby. 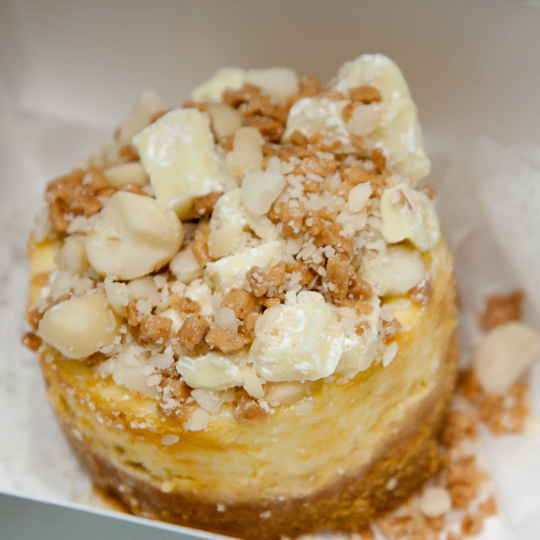 Somehow, we managed to get the haul home with everything intact. I don’t know how. I think it’ll be a while before I take on a task like this again. Wrangling 2 kids, a camera, and all that food completely exhausted me. I’m not sure I’m ready to enter a bakery again for a while either. Still, it was a fun experience and certainly something I haven’t done before. Next time, maybe pizza eateries instead? 😉 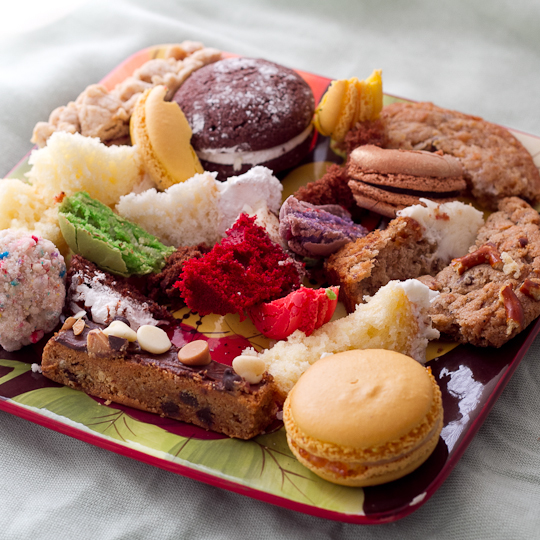