Fridays are usually a little crazy between the kids’ schedules for preschool and Kindergarten plus all the errands I usually run. Instead of the usual Friday grind yesterday, however, we escaped to New York City–where all the hustle and bustle refreshingly wasn’t ours.

I love the City, having rekindled our relationship this past summer, but I’ve never visited in the winter before. So what drew me in during what I consider the off-season? Dorie Greenspan’s CookieBar pop-up. 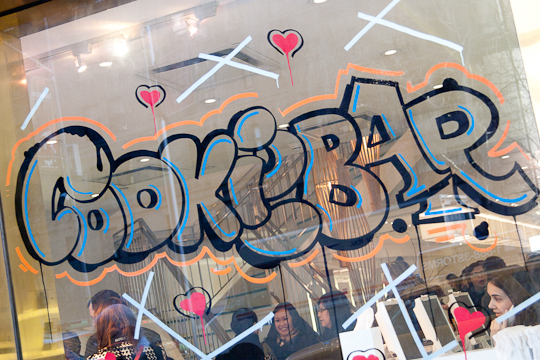 If you’re not familiar with Dorie, she is the author of, among many others, Baking: From my home to yours. This has stemmed off into a blogging group called Tuesdays with Dorie. Her latest cookbook, Around My French Table is behind French Fridays with Dorie. She has worked with Julia Child, is a long-time contributor to Bon Appétit, has written 10 cookbooks in all, and lives in my home state. Oh yeah, and she’s a sweetheart. 🙂

My little guy didn’t have school anyway so I made the executive decision to take a day of schooling on the road for my daughter and we headed out for a cold day in the City. We almost missed our train so we barely made it to CookieBar for the blogger meet-up at noon on the final day of its operation. The nature of a pop-up is, after all, that it’s only open for a limited time. In this case, that meant Monday through Friday of this week, or until the cookies ran out. This was time-sensitive stuff here! 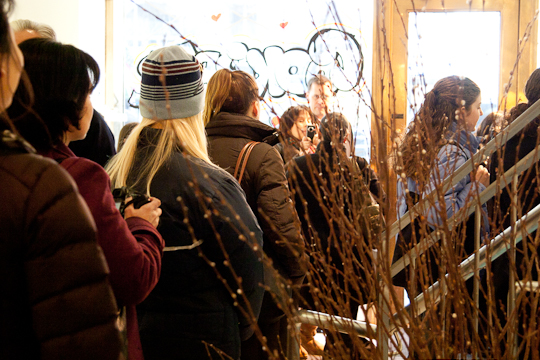 The line was long but there were smiling faces and as I walked in, I was greeted warmly by Chris of the pêche and Gail of One Tough Cookie, two bloggers who were promoting the event on Twitter. I felt as if we were long-time friends instead of new acquaintances! And it was pretty cool having my blog recognized by someone who is not in my inner circle. 🙂 I dragged the kids to the end of the line, eager to enter cookie heaven. 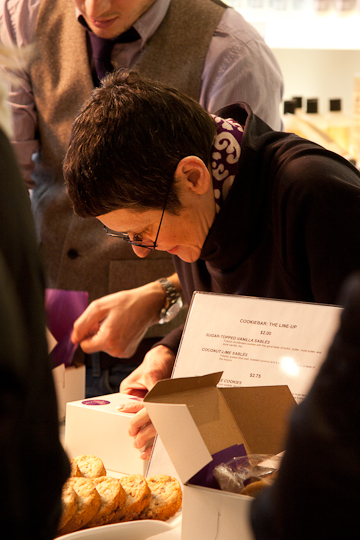 Unfortunately, it wasn’t long before it dawned on me that this was probably a cash operation. And our haste meant that I had not yet stopped at an ATM. Checking with the man in line in front of me confirmed my suspicions. So, back out the door we went to run to the ATM across the street, nervous that we would miss out entirely on the reason for our trip. Especially when we passed the man in line in front of us on our way back and he said they were out of most cookies. Yikes!

Luckily, we got back just in time. I’m pretty sure we were the 2nd to last customers, helping to clean out the coconut lime sablés and grabbing some of what I thought I was told were blondies, but they weren’t on the original menu. I was just so grateful to get anything at that point that I wasn’t going to quibble about what they were. Our mission was fulfilled! 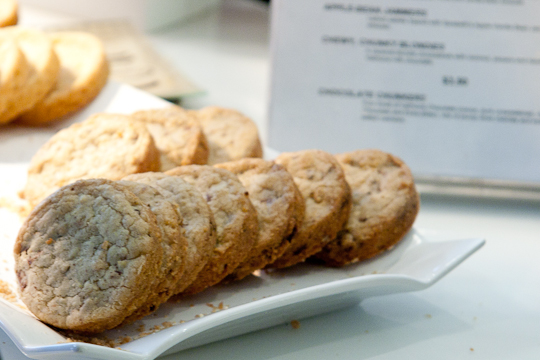 The location was a little cramped so I didn’t get to hang around and hobnob with everyone. The brief conversation I had with Dorie was very warm, however, and she surprised me by recognizing my hometown, a place where many who live in Connecticut aren’t even familiar with. Another quick conversation with Chris of the pêche on my way out and we were on our way. The build-up was long, but the errand itself was quick, and we found in our possession 9 of Dorie’s delicious cookies, just for us! 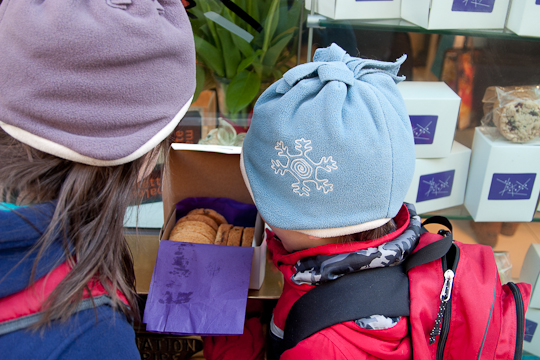 The kids salivated over the cookies, urging me to photograph them quickly so they could indulge. We hovered outside Mizu salon, the location for CookieBar, and got to work straight away. A few adjustments–I’m not used to using the 10D these days so it took a little time–and then I let them each pick out a cookie.

It was worth the wait. 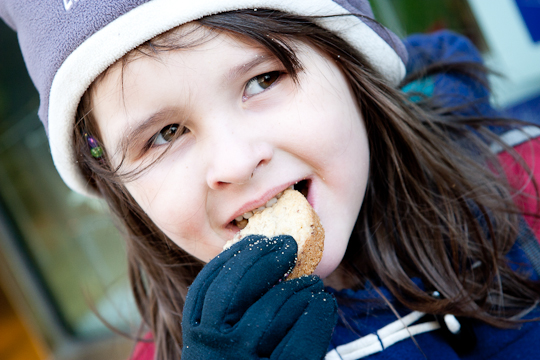 Our day in NYC doesn’t end there, however. When I decided on this crazy trip of traveling over 2 hours just for some cookies, I envisioned a grander mission–one encompassing multiple dessert options in the general vicinity. Armed with my printout from google maps, we were ready to head over to stop # 2…