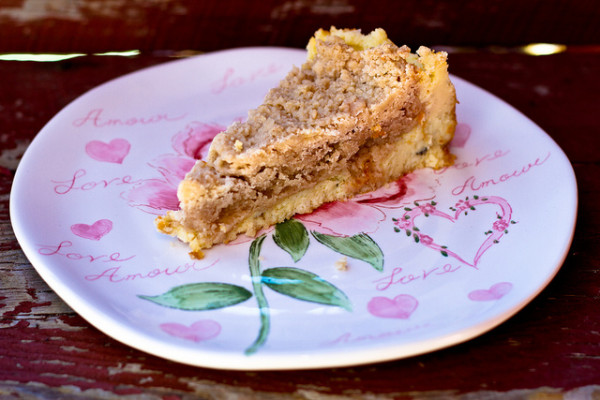 I love New York City. Even though I live only 2 hours away, for many years, I didn’t travel there at all. This past summer, a friend reminded me of all the things I loved about the City and so I visited it again, several times–the last being for my birthday in October. The trip itself was somewhat of a flop. We wanted to attend the New York Burlesque Festival but in an attempt to circumvent exorbitant Ticketmaster fees, I didn’t buy the tickets ahead of time and it sold out–which we didn’t discover til we went to wait in line for the performance. There was no backup plan. Distraught, we started wandering toward Greenwich Village, hoping something would present itself that would be a suitable replacement for my birthday festivities. What followed was a long, long walk with a lot of frustration (10.5 miles throughout Downtown in boots that aren’t meant for walking is a painful affair!) but there was a moment in the middle of serendipitous delight! 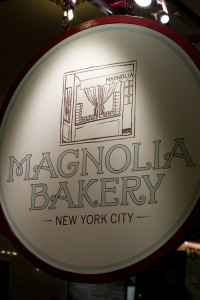 Magnolia Bakery. THE Magnolia Bakery. Well, one of them. We had seen the one in Grand Central Terminal and I knew there was one in Greenwich Village, but I was unable to locate it the last time I was in the area. But there it was, right before us, an oasis in the desert of birthday celebration. It was nearly closing time and the line snaked around the counter inside all the way to the door. I had no clue what I wanted, I just wanted to try something.

I got in line, nervous and excited. What to pick? What to pick? I didn’t want to hold up the busy people behind me–it was such an efficient operation! Luckily, I discovered the perfect confection for the occasion, just sitting there innocently, waiting in the bakery case–white chocolate cheesecake. Hubby and I devoured it on the sidewalk outside, bypassing our forks in favor of our hands as a more efficient means of capturing every morsel. Mmmmmm… It was worth every filling gram of fat, every freaking calorie. Delicious!

For Christmas, hubby recaptured that moment by giving me The Magnolia Bakery Cookbook: Old-Fashioned Recipes from New York’s Sweetest Bakery. We can’t go there often, but at least I can attempt to recreate that moment at home–a few seconds of New York in my own kitchen.

I only had a 9-inch springform pan, so I did the best I could with what I had. In the future, I will adhere a little better to the rule: always use the size pan recommended in the recipe. There was a moment–when I had to take it out of the oven to add the crumb topping–when I thought this wouldn’t work. Over 4 cups of topping crowning a cheesecake that was already to the rim? But I dutifully added it. It all fit in the end, but it took quite a bit longer to finish baking because of my ill preparation in pan sizing and the end result wasn’t a pretty picture. Tasty, but not beautiful. Crumb toppings are supposed to be on rustic looking baked goods anyway, right? 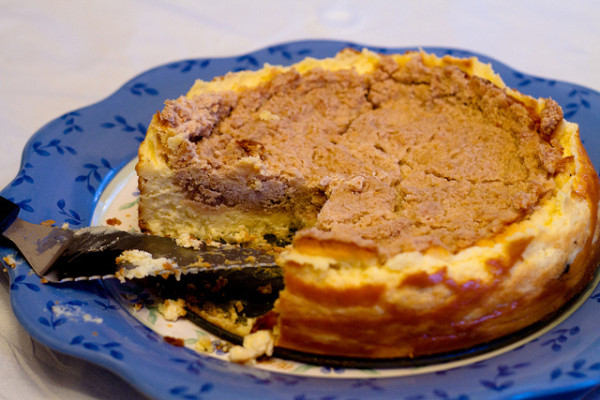 This cheesecake is a bit different in that there is no crust, but that’s a nice time-saver, too. Many people recommend a water bath when making cheesecake so you don’t get cracks on the top but since this one has a crumb topping, it’s not a concern. Plan ahead! It does need to be refrigerated for half a day before you can serve it and you really do need to take it out 20 minutes or so before you plan on eating it, otherwise it’s a bit difficult to cut through that crumb topping.

I made this for my grandmother’s 89th birthday party yesterday and it was a hit! Another birthday with a Magnolia Bakery cheesecake… this one, without the trip to NYC for it! 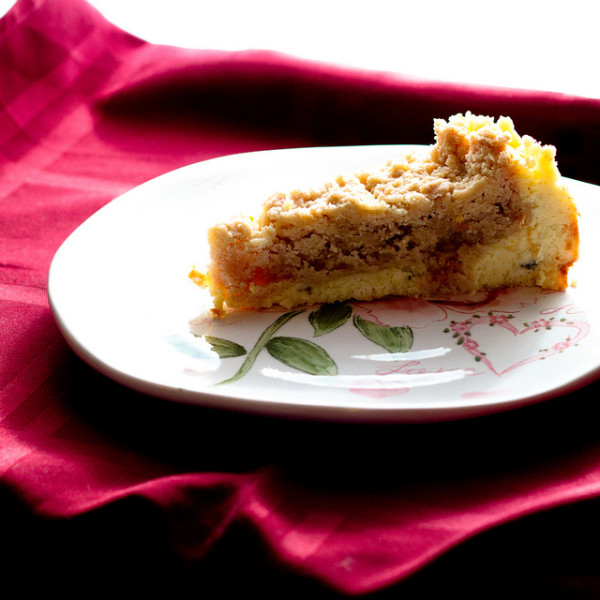 Preheat oven to 325 degrees Fahrenheit. Butter the bottom and sides of a 10-inch springform pan.

In the bowl of your mixer, beat the cream cheese at low speed until it is smooth. Slowly add the sugar. Add the eggs, one at a time, beating well in between. Scrape the sides and bottom to ensure the filling is mixed well with no lumps, then stir in the heavy cream and vanilla extract.

Pour the batter into the prepared springform pan and set the pan on a baking sheet. Bake for 40 minutes.

In a medium bowl, stir together the flour, confectioners sugar, cinnamon, and baking powder. Use a pastry blender or 2 forks to cut the butter into the mixture, working until you have coarse crumbs

Carefully remove the cheesecake from the oven and sprinkle the topping evenly over the top of it. Return it immediately to the oven, baking for another 20 minutes.

Bake until the edges are set and center moves slightly when pan is gently shaken, about 1 hour in total. Once it has reached this point, turn off the oven and prop open the oven door with a wooden spoon to keep it slightly ajar. Cool cheesecake in the oven for 1 hour before removing. Cover and refrigerate for at least 12 hours. Remove from fridge at least 20 minutes prior to cutting to serve.