Last month, when Big Y was offering their Buy 1 Get 2 Free sale on apple cider, I stocked up and decided to reduce some of that deliciousness into a concentrate for future use. I had no particular plans for it at the time–just felt that it was something I had to do, even though I’ve never made apple cider concentrate before. 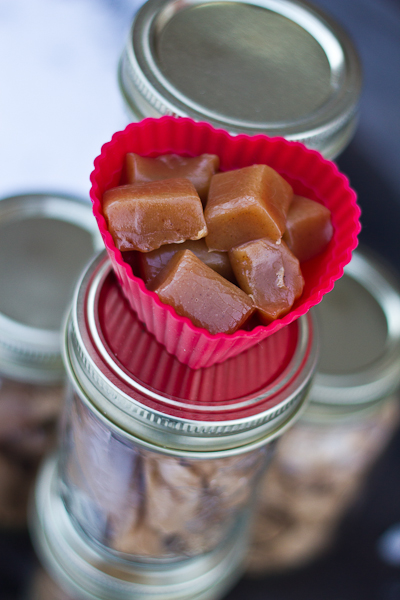 Today, inspiration struck. Browsing on foodgawker, I came across a recipe for Apple Cider Caramels on Blondie’s Cakes. I had been meaning to make caramels for some time now… And how often do you come across anything that the first step requires making an apple cider reduction? Pretty rarely! Divine intervention? Probably not. But divinely delicious, indeed! 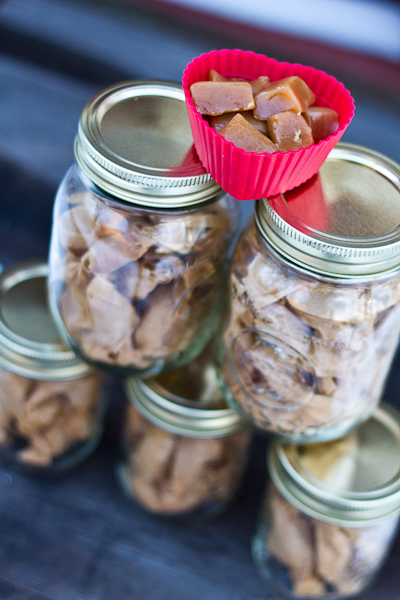 We try to avoid corn syrup, mainly because it’s almost guaranteed that it’s from genetically modified corn. This has prevented me in the past from making many confections. Recently, I’ve grown more comfortable with substitutions and decided that it would not be a deterrent this time. I used some of the organic Grade A maple syrup I picked up from Ocean State Job Lot for a song and it worked well to prevent crystallization (the purpose of corn syrup when candy making). I had hoped it would add a nice flavor dimension since maple goes so well with caramel apple, but it didn’t seem to make any difference in the final product. I suspect that light agave nectar would work well or you can use Golden Syrup (if you can find it–I no longer have a local source). I have read that simple syrup also works, but I haven’t tested any of these alternatives. 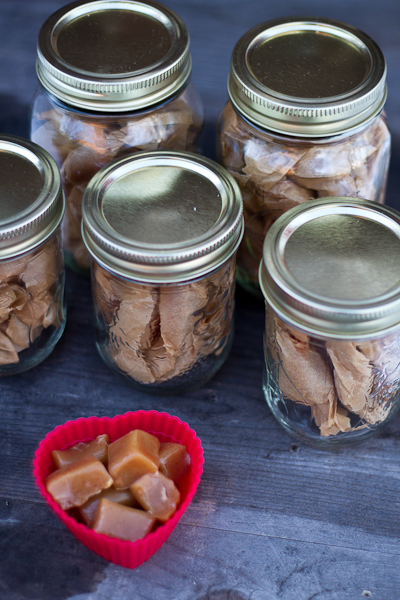 Give yourself plenty of time: this needs your undivided attention. You don’t want to be walking away to reprimand naughty children or check your email. There isn’t a whole lot to do, but you do have to wait for the syrup to get up to 234 degrees before adding the second half of ingredients, and then to 248 degrees before removing from the heat and pouring into your prepared pan to cool. This does not happen as quickly as you’d think and you don’t want to rush it. If you have to make the apple cider reduction, that’s another 20 minutes or so tacked on at the beginning. Then, of course, is the wait for the caramel to set so you can cut it up, pretending you’ll practice portion control. Add on the actual cutting up, cutting wrappers from wax paper, the wrapping itself… But trust me, it’s worth the wait. And you get a lot of caramels for all your effort. Enjoy!

If you don’t already have apple cider reduction on hand, you have to make it first. Pour 2 cups of apple cider into a medium saucepan and boil on high for about 20 minutes, or until the cider is reduced to 1/3 c. Keep a measuring cup nearby in case you need to measure a few times to make sure you have the correct amount. Set aside.

Prepare your 8″ square pan by lining it with parchment paper, leaving about 1″ hanging over the edges for easy removal. You can spray the parchment paper with cooking spray or butter it, but I felt this was redundant and skipped that part.

In a large, heavy bottomed saucepan, combine the sugar, 1/3 c. whipping cream + enough water to reach the 1/2 c. line on the measuring cup, and maple syrup. Cook over low heat until the sugar dissolves, then insert the candy thermometer and simmer until the syrup reaches 234 degrees.

Remove from heat and slowly whisk in the cream mixture. Add the cubed butter and stir until the cream and butter are fully incorporated. Return the pan to heat and re-insert the candy thermometer. Cook over low heat, stirring frequently, until the temperature reaches 248 degrees.